Social Bundestag: Twitter distribution of seats in the German Bundestag

More and more political debates and campaigns take place in the digital space, most notably on social media platforms. The COVID-19 pandemic has further strengthened this change in political communication – and there is certainly no going back as technology advances. With our “Social Bundestag” series we take a closer look at the online presence of the newly constituted 20th German Bundestag on Twitter, the most commonly used platform amongst German politicians. We analyze the overall tone and topics of the tweets, discuss trends and changes in the digital political discourse, and conclude about the impact on German politics and society as a whole.

In 2020, Twitter counted approximately 200 Million daily active users. In Germany 1.4 Million people use it, while more than 80% of all Members of Parliament (MP) have a Twitter account – that is 597 out of 735 Members of the German Bundestag. Twitter has especially developed into an influential news application as political information are often first published there and shared very quickly among politicians, their employees, journalists and political communicators of the so called “political Berlin bubble”. But the micro-blogging social network is no longer only used to “tweet” opinions and to interact with the ones online, through Twitter´s amplified reach of trending topics, “spillover effects” into classic media like newspapers and television are increasingly used strategically to reach an even greater audience. Hence, looking into Twitter and analyzing the political network is very important for strategic communication in the digital era.

The three newly governing parties – Social Democrats (SPD), Greens (Bündnis 90/Die Grünen) and Liberals (FDP) – are the most active on Twitter. Greens and Liberals are clearly overrepresented on social media taking the number of tweets they released between the election and December 2021 compared to the other fractions and their real percentage of the distribution of seats in Bundestag. Since Greens and Liberals were election winners in terms of younger voters in this past federal election, the strong overperformance in digital communication implies to be an important factor for successful political communication especially in terms of campaigning. 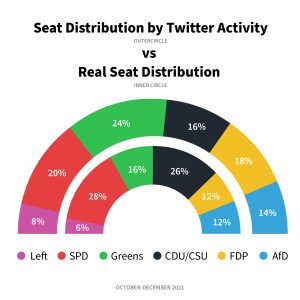 On the same note, the Twitter underperformance of the Christian Democrats (CDU/CSU), the prior governing party that still accounts for 26% of the real seat distribution but only 16% on Twitter, represents their loss in votes and ultimately, their departure from the government. Now, the social democrats deserve a closer look, not only because they are the only “remaining” governing party, thus, the election winner who also provides the new chancellor, but also because their performance doesn´t fit into the picture at first glance. As the distribution demonstrates 28% of the seats in parliament belong to the SPD while their digital performance only represents 20% of the total twitter activity by all members. Hence, they are also underrepresented on Twitter but still managed to surprise with their election results and that particularly after it was long assumed that the former great people´s party would dissolve. Therefore, the question, how influential Twitter and digital communication really is, arises. Our analysis reveals the reason for this discrepancy between the real and digital seat distribution and explains how Twitter should be used successfully: through political agenda setting and a reliable digital identity.

The three main themes that resulted from the analysis of all tweets by the members of the newly elected Bundestag between September and December 2021 were:

The twitter dominance around “Angela Merkel´s” departure is no surprise since the last quarter of 2021 were not only the last months of Germany’s prior federal chancellor, who led the country for 16 years, but also because she only officially gave her position over to Olaf Scholz, SPD in the beginning of December. The overall summary of this first analyzed quarter shows, that the departure of the old government, preparing for the new one, especially in terms of Covid, dominated on Twitter. The theme “dare to progress” is the slogan of the three coalition parties that emerged during their coalition negotiation phase. While discussing a more progressive government, the debate on how to break the fourth wave of COVID-19 infections – which hit the country in late fall of 2021 – was also one of the main concerns that were tweeted. Hence, in terms of content, “the way out of the pandemic” was the way “into the new government”.

Social media has become an integral part of political communication in Germany. Therefore, agenda setting must be done on Twitter, especially in times of change. Even though the SPD does not overperform as a fraction, the top ten Twitterer are not only led by one SPD parliamentarian, four out of ten politicians are social democrats as well, as the following chart demonstrates: 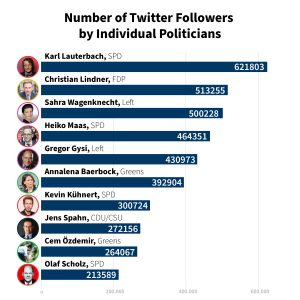 The “king of Twitter” in the German Bundestag is undoubtedly Dr. Karl Lauterbach (SPD) who was able to dominate one of the main topics, Covid-19, due to his background and expertise in virology. Through this relevant topic he became one of the most influential politicians during the pandemic and not only on Twitter but also on classic media. He rose to prominence by frequently speaking on talk shows on television, while tweeting about the most relevant situation, arguing in favor of COVID-19 measures, and becoming the voice of science. Dr. Karl Lauterbach is the example how agenda setting, based on a relevant topic, is best maneuvered over a long period of time and how an individual politician builds up a reliable digital identity, the real reason for followership.

Nowadays, social media serve as an indicator for public opinions and therefore it is of upmost importance to create a personal image, a digital identity, to be followed. Dr. Karl Lauterbach’s (SPD) appointment as health minister demonstrates today´s influence of social media and how he successfully built a reliable image over time. Through his regular updates and his commentary, he built a significant followership on Twitter with around 755,000 followers. This number is the largest of all the MPs and more than twice as many as former health minister Jens Spahn (CDU) had.

Since the election the health minister position was one of the most discussed and even after the social democrats published to be filling the position many names were debated to fill this challenging seat. Dr. Karl Lauterbach was clearly not the party´s favorite, but his immense popularity ultimately lifted him into the position. Twitter users started a campaign leading up to the announcement under the hashtag “we want Karl.” And when SPD secretary-general Kevin Kühnert announced Lauterbach’s appointment by saying: “you wanted him, you will get him”, he also did that on Twitter, making Lauterbach the first minister appointed through the network. 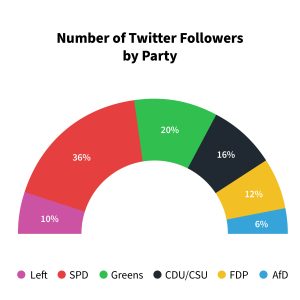 Relevant Topics and Reliable Identities are Key in Digital Communication

This first evaluation of all tweets by members of the Bundestag shows how much German politics has – or has not – arrived in the digital space. Our analysis highlights the growing importance of the strategic use of social media for politicians as well as the ones communicating with politics. This first quarter after the elections looks like as if individual politicians and the new coalition parties are using Twitter successfully in terms of relevant topics and reliable identities that are key in digital communication. It will be exciting to see how the new constellation of governing parties, coming from the opposition, will use and further develop their digital competence as the new government.

The views expressed herein are those of the author(s) and not necessarily the views of FTI Consulting, its management, its subsidiaries, its affiliates, or its other professionals.