Lessons for leaders communicating online during a crisis

More CEOs are actively engaging on social media than ever before: over 40% of CEOs across the FTSE 100, CAC 40 and DAX 30, a trend that has been accelerated during the past year as CEOs were forced to lead from home. This presents its own risks, but also opportunities when managing a crisis given the fact that CEO-shared content receives considerably higher engagement than content shared by company channels.

Leaders’ crisis channels are often forgotten in crisis plans, they provide the perfect opportunity to be human and visible, but it is important to build up your reputational credit during peace time to give you the platform to communicate during a crisis. 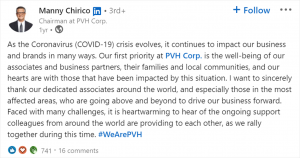 Even before the pandemic, leaders were increasingly turning to social media during times of crisis. With the dual health and economic impacts of the coronavirus pandemic, it’s perhaps no surprise that so many leaders are keen to speak directly with their stakeholders through digital channels, providing a more authentic and immediate voice in an ever-changing landscape.

At a time when corporate stakeholders and the public are expecting, and paying closer attention to, direct communication from leadership, it is essential leaders manage critical events in the right way.

1. Engaging through the good times, and the bad 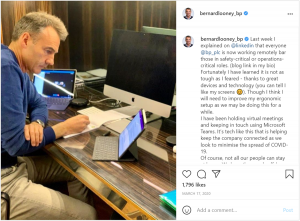 It’s not enough for leaders simply to become visible at the time of a crisis. Our recent research Leading from the Front: Successful Strategies for the Social CEO highlighted that ‘Crisis Communicator CEOs’ – those that primarily turned to social media at a time of crisis – received the least engagement per post from the five personas analysed; the other four being The Generalist, The Company Spokesperson, The People Person and The Purpose Champion. If you only communicate to your audiences in times of difficulty – you risk not accruing a sufficient bank of reputational credit to call upon in times of need.

Critically, when posting about a crisis, our Crisis Communicator CEOs received half the level of engagement as non-Crisis Communicators. For CEOs to really make an impact during a crisis, it is best to post on other topics and at other times too. Without a strong foundation of ongoing engagement, audiences are less likely to engage during a crisis. 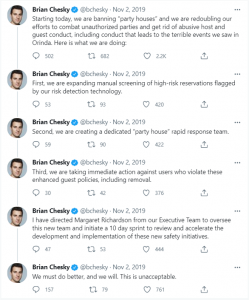 2. Be visible and respond to demand

Both the public and employees expect leaders to communicate openly and authentically. This is in part because of social media, but also because of the need for greater direction and trust in an increasingly fast-paced and unpredictable world. Social media allows leaders to adapt to critical events, which can change every hour. People also want leaders to speak out about issues they care about – beyond the day to day business activity of financial results, award wins and employee hires.

This demand is only made more urgent during a crisis, when audiences, particularly employees, look toward CEOs to speak on critical issues – building on the trust established through effective everyday social media use. Going silent during a crisis leaves a leader open to interpretation as to where their priorities lie. 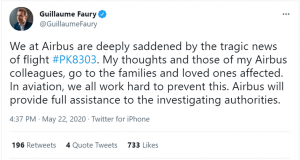 It’s no surprise that CEOs’ social media statements are often referred to more often in media coverage compared to the corporate statement.

During a crisis it can be difficult for the public to see the empathy behind a corporate message. Not every issue calls for leadership involvement, but at the right time it’s possible for a CEO to demonstrate humanity, to be seen as responsible – to be authentic. Ultimately this translates back to the company, creating a sense of trust – the most important component of crisis communications.

This nuance afforded to leaders allows them to prioritise those affected first and foremost, while also showing confidence that the business will find its way through the challenging period.

4. Formalise and prioritise leadership channels in crisis planning and delivery

In terms of resource and internal focus, leadership communications channels are sometimes the poor relations of corporate social media. While the company Twitter account is often well-resourced with extensive content plans and sign-off processes, leadership channels are often neglected from both a content and governance perspective. This is despite the fact that individuals’ channels receive considerably higher levels of engagement than brand channels.

For the CEOs and leaders who are actively engaging, success is underpinned by a comprehensive and tailored social media strategy – with flawless ongoing execution. In times of crisis, organisations should have processes to fall back on, and the role of the CEO and leadership communications should be built into these plans. Their impact requires that they receive the same weight and attention as other communications channels – both in terms of preparedness and real-time crisis management. In particular, reviewing and stress testing crisis plans, policies and processes will highlight capability improvements that will strengthen preparedness and overall resilience.

FTI Consulting’s Strategic Communications practitioners support a wealth of companies and their leaders with social media engagement, including during times of crisis.

FTI’s Crisis+ service supports clients with their preparation for incidents through developing Crisis Management as a strategic and cross-functional capability; and provides real time guidance and implementation to respond and recover when crises hit; delivered by a dedicated team of crisis   experts with Communications at its core.