Healthcare providers: A crisis beyond the crisis

A critical look at clinics and hospitals in LatAm, and a perspective on how to manage a crisis that was aggravated by Covid-19.

As a result of the Covid-19 health emergency, clinics and hospitals suddenly moved from the stability of sustained services demand, to a profound uncertainty that will force to rethink their models and structures.

Clinics and hospitals are now in a situation that has transformed from chronic  and delicate to extremely complicated. This has happened after realizing how the already oversized financial challenges have been exacerbated with the sudden reduction in the demand of health services due to cancellation of scheduled surgeries, outpatient consultations, complex procedures and medical exams.

As in many other countries around the globe, health systems in Latin America have collapsed due to the rapid rise in Covid-19 cases. The region is now accounting for more than a quarter of all reported global cases: 26.83%.1

Considering the scenario for healthcare systems in the region, where government spending in healthcare is well above recommendations by organisms such as the OECD; rural access has not improved and there are several quality difficulties and the relation health providers have with users. Relations that have been traditionally antagonized, specially nowadays when trying to stop a rise in the number of cases and where most of the region’s inhabitants live in urban areas (80% of the population according to the UN) 2 any initiative or effort will soon or later face a reality: health systems were not prepared for an outbreak like this. No one around the world was prepared, but Latin America was in an evident disadvantage compared to other regions, and with the figures in the rise, it becomes more evident than ever.

There is a significant lack of staff prepared to deal with the pandemic, as well to maintain care services for other diseases. According to the OECD, there is an average of two doctors per 1.000 people in the region. The average number of available beds in hospitals is 2.1 per 1.000, a number that reaches only 1 bed in certain countries3.

Resources and capacities were not able to have a proper response at pre-pandemic times. Thus, when cases for Covid-19 began to rise, there were even more challenges on how to redistribute funds, define new protocols and face an unknown disease in uncertainty. All governments have funneled considerable amounts of resources to contain the pandemic, in a context with lack of supplies due to a high demand (respirators are a clear example) and insufficient number of healthcare professionals. The situation is exerting pressure in all healthcare providers, that are carrying the financial burden of maintaining their infrastructure in operation. 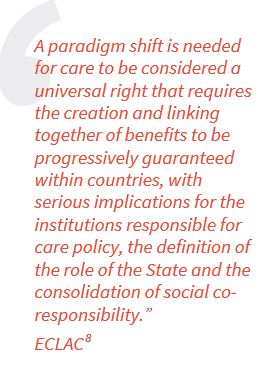 It is not a secret that local efforts for stronger health systems have been done, but healthcare in the region is still very dependable from private spending. According to data from OECD, Government and obligatory health insurance in countries of Latin America and the Caribbean amount up to 54.3% of current expenditure on health (in average for 2017). The remaining percentage is usually covered by private insurances or out-of-pocket expenditures by households4. Almost 34% of all health spending in the region comes from out of pocket, which has a deep impact on healthcare providers and governments, as the economic deceleration has caused these expenditures to stop as resources have been used to readjust living in the pandemic. When we consider that almost 8% of the population in 16 countries of the region usually spend around 10% of their income in health4, numbers and profitability for the healthcare system start to crumble.

The pandemic has laid a minefield of challenges for healthcare providers. Hospitals and clinics must, at the end of the day, provide the needed services for patients, whether they have Covid-19 or not, and as first line responders they will certainly fulfil their duty, with every tool at hand. This will create another pain spot, as the ILO has mentioned. Not only they are exposed to the virus, but the burden will has an impact in safety and mental health5, later aggravated by the possibility of facing an employer without the liquidity to sustain jobs.

According to OECD, half of the population worldwide still has not full coverage of essential health services6, improvements have been made, but the region is still far from solid numbers. In the region, inequalities are still one of the main concerns from many points of view, and violence throughout Latin America continue to be one of the most critical issues in health, as one third of the recorded homicides globally occur in their territories7. As this complex situation moves forward, and a new reality emerges from the pandemic, healthcare systems will face themselves with challenges that will probably require an strategic approach, changing models and looking forward to a new reality in the sector, involving the patients, insurers, the government, academy, healthcare professionals, investors and many other actors that will take part of a discussion that, in the end, will be impacted. And they will all be looking for a transformation. As the ECLAC mentions: “A paradigm shift is needed for care to be considered a universal right that requires the creation and linking together of benefits to be progressively guaranteed within countries, with serious implications for the institutions responsible for care policy, the definition of the role of the State and the consolidation of social co-responsibility”.

The  challenge  for  clinics  and  hospitals  is  to  respond  to    a pandemic with limited information, that generates uncertainty. This, amid a health system that was not prepared and whose financial and operational wounds are deepening.

The issue is a constant in the region; in Latin America the spending of central governments in their health systems for 2018, according to ECLAC9, did not exceed 2.2% of regional GDP, in contrast to the 6% recommended by the Pan American Health Organization. Certainly, with a scarcity of resources, the pandemic exacerbated the crisis in all health systems in the region. 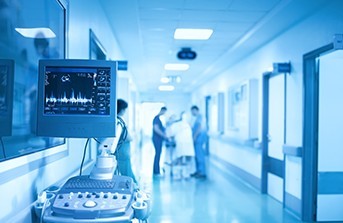 The current scenario puts organizations’ capacity for reaction and adaptation to the test and should be understood as an opportunity to solve the structural and specific needs of providers and patients, as well as to generate changes that transcend immediate actions. Adopting this attitude will allow clinics and hospitals to achieve financial viability through new more decisive models of service, higher quality and with better response times, in the medium and long term.

If problems evolve, solutions must too

Clinics and hospitals are facing a great structural opportunity to change, transform and even reinvent themselves without neglecting the reality of the pandemic. The way forward must be the definition of mechanisms that allow adapting and transforming, generating models of operating and a patient-centered care, with multiple efforts aimed at sustainability.

Organizations that survive are those that best adapt to change

A new item in the already long list of challenges for the hospital and clinic sector lies in achieving a balance between financial stability, business protection, and continuity in service provision. Covid-19 has affected the entire health system, bringing additional effects on the rate of complaints and claims and the capacity to a timely response by healthcare providers, putting the operation at risk.

Therefore, it is necessary to adjust and transform elements in the operation and transaction model to generate efficiencies, achieve greater flexibility, and at the same time safegard financial sustainability.

Sustainability with a long-term vision

Perhaps the Covid-19 crisis, rather than showing how complex a potential crisis in the health sector could be, might be triggering and accelerating a necessary evolution to strengthen how service is delivered in order to redefine a robust system, which uses innovation and the creativity of technology to achieve sustainability of its own operations, now focused on care, prevention and well-being

The views expressed herein are those of the author(s) and not necessarily the views of FTI Consulting, Inc., its management, its subsidiaries, its affiliates, or its other professionals. FTI Consulting is an independent global business advisory firm dedicated to helping organizations manage change, mitigate risk and resolve disputes: financial, legal, operational, political & regulatory, reputational and transactional. FTI Consulting professionals, located in all major business centers throughout the world, work closely with clients to anticipate, illuminate and overcome complex business challenges and opportunities. For more information, visit www.fticonsulting. com and connect with us on Twitter (@FTIConsulting), Facebook and LinkedIn