Your update on COP26

As the implications of the last few weeks of negotiations continue to be analysed, in the final COP26 special edition of our ESG+ Newsletter, we seek to add some perspective based on insights from across the FTI Consulting team and global international investors.

Up first, FTI Consulting’s senior advisor Claire O’Neill considers the role of the private sector in the midst of global governmental negotiations, and how these two groups can work together. With a lens into the overall outcomes and the next steps for business from Glasgow.

And once again we have ventured out into the capital markets to assess how institutional investors have responded to the outcomes of the conference as well as how society at large is responding to the row back on coal from “phase out” to “phase down” through analysis of conversations online. 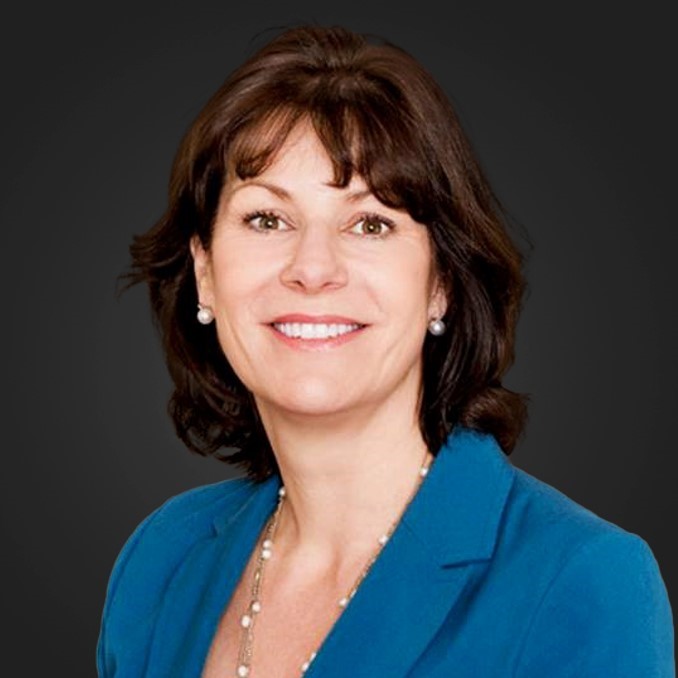 It is extraordinary that the world meets once a year to discuss the topic of climate at a time when multilateralism is fraying. I have been to a number of COPs, and this one was an extraordinary moment for business engagement. Having said that, there was a disconnect between public and private spheres.

Chief executives were keen to bring their own pledges forward and hundreds and hundreds of business leaders were there which has never been seen before.

But the final text does not mention business – and yet 70% of emissions come from business. There is a disconnect between the sense that governments will regulate us to a net zero future, and the corporate sector.

There are three ways to close this gap. First, we need sector deals where governments can set a direction of travel for sectors like steel to align with. Second, we need a mechanism for reporting business commitments which must be held accountable to a high standard. And third, businesses need to keep showing up. This is an unstoppable shift now – every company will need to have a net zero strategy, and there will need to be ongoing engagement between the two ecosystems. This was a pivot point and sustainability has gone mainstream. So it needs to be part of boardroom strategy rather than a tick box exercise.

Investors lukewarm on COP26, but better than expected

As part of FTI Consulting’s regular research with global institutional investors (GII), we have timed it to collect their opinions on the success and impact of COP26 and other related issues. While time will tell on the actual impact it will have in reaching the objectives set, there is a key role for companies and those invested in them to play.

While it is clear there is broad-based pressure on companies, our research shows 3 in 10 (30%) of GII consider listed companies are under ‘extreme pressure’ to improve their ESG disclosure and practice. To put this into context, this extreme pressure to improve ESG has increased by +7% in just over 6 months and has jumped from 8th place to 5th place, behind the top ranked ‘Increase profits’ with 38% (Q5). This pressure on ESG also reflects the views of these GII respondents, with 30% (and also in 5th place) wanting companies they invest in to particularly prioritise improving it (Q6).

With 83% of GII agreeing that ‘the threat of divestment is an effective way to encourage companies to improve their ESG rating’ and with a sum total of over USD$9 trillion assets under management (AUM), our respondents have considerable investor muscle. For listed companies, one of the key messages from our research is a focus on reducing instances of greenwashing and enhancing transparency.

As for COP26, although GII opinions may be lukewarm, the majority consider it was better than expected. In addition, and reflecting a story in our routine ESG+ newsletter yesterday, investors believe governments have a strong role to play in addressing climate change – and it is not solely the role of the corporate sector. 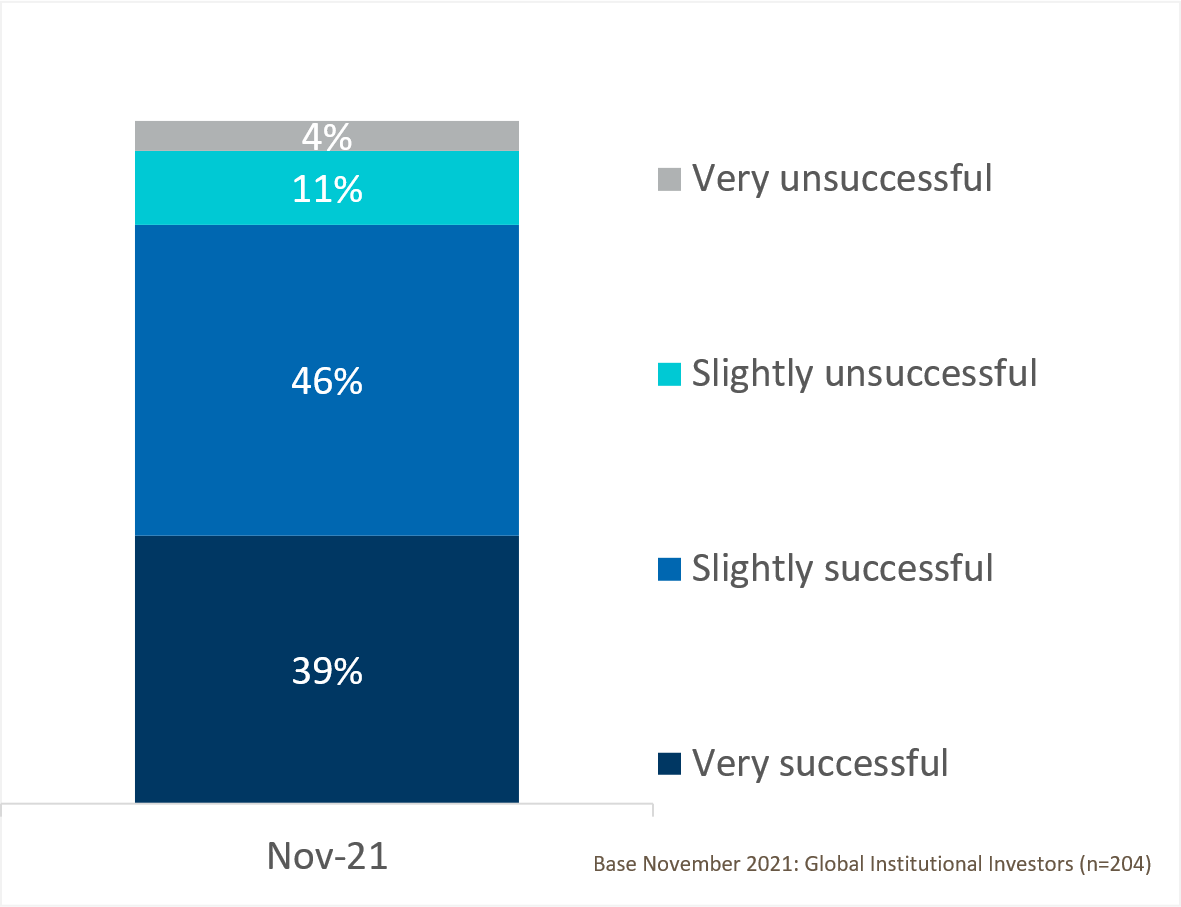 2 – OVERALL OPINIONS ON COP26: DIVIDE BETWEEN EUROPE AND NORTH AMERICA

Almost 4 in 10 (39%) consider COP26 was very successful, with North American based investors being particularly complimentary of it 45% consider it very successful, compared to just 28% for those based in Europe (Q25).

Considering the build-up, 68% considered it to be more successful than expected (Q32).

3 – COMMITMENT FROM COUNTRIES IN SUPPORTING COP26: EU, UK AND USA MOST COMMITED

The EU was thought to be the most committed to supporting the objectives of COP26 by 56% of investors, followed by the UK and USA, evenly matched at 54%. Comparatively, Brazil was considered the lowest with just 31% of those countries tested. Notable others were China with 37% and Russia marginally higher with 38% (Q28).

4 – ROLE OF GOVERNMENTS: A WELCOMED PUSH FROM POLITICIANS

While politicians (40%) are pressuring them to use their investor muscle to support the objectives of COP26, almost half (48%) strongly agree that ‘Governments should regulate and set targets for non-financial reporting by companies’ (Q34).

Investors consider the most effective way assessed in the research for governments to help reduce climate change is with ‘’International agreements between governments’ (according to 52%), followed by ‘’National and regional regulations targeting greenhouse gas emissions’ (49%) (Q18).

5 – SIGNED UP AND INFLUENCING: 8 IN 10 GII SIGNED UP TO UN PRINCIPLES FOR RESPONSIBLE INVESTING AND UN SUSTAINABLE DEVEVELOPMENT GOALS

In terms of referring to ESG rating / report services on companies, Bloomberg ESG Data is the most common with 46% and a further 34% claim they will, bringing it to a total of 80% of investors researched. The next highest is S&P Global Ratings with 76% (Q9).

As a reporting framework for companies to adopt, the highest was CDSB with 43% (particularly in North America), closely followed by SASB with 42% (particularly high in Europe).

This research was started on 12th November, in the closing days of COP26. It was conduct online with n=204 Global Institutional Investors (GII) from companies with an average of USD$45 billion assets under management (AUM). Tended questions were comparably compared to research with n=250 GII with an average of USD$ 44 billion AUM, conducted online back on 30th March 2021. Due to the conventions on rounding, some aggregates won’t add up to exactly 100%. For more information on the research methodology, contact [email protected]

The view from social media: coal down but not out

Our analysis this week examines social media reactions to COP26 discussions around coal. While many social media commentators agreed that the first explicit mention of coal in a COP text was a success (~3k mentions), the “phase down” vs “phase out” wording in the communiqué did not go unnoticed (45k mentions). Criticism was led by NGO leaders and climate justice campaigners who called attention to the matter. Although less critical overall, energy journalists and academics also played a key role in drumming up Twitter conversations on the topic.

The main criticisms discussed on social media were:

Perhaps unsurprisingly, analysis of language used in the social content on the change to “phase down” (shown left) shows that the predominant sentiments are sadness, anger and fear.

COP26 outcomes and next steps

A number of new commitments and step changes happened at COP26. One significant outcome was the strengthening of language in the formal agreement signed by more than 200 nations that placed the best available climate science at the heart of the negotiations – specifically, the IPCC’s analysis that to limit global warming to a rise of 1.5°C above pre-industrial levels, emissions must be cut by 45% by 2030. COP aficionados point out that the agreement – the Glasgow Climate Pact – was also notable for referencing fossil fuels for the first time, and Christiana Figueres, an architect of the Paris Agreement, drew attention to its use of more direct and urgent language than has been featured to date. In finance, the launch of the Glasgow Financial Alliance for Net Zero (GFANZ) will help align capital flows with climate outcomes, and multiple industry initiatives in areas including shipping and aviation in the transport sector; and in the real estate sector, indicate that these sectors are actively engaging in efforts to reduce greenhouse gas emissions.

Against this momentum, there is still much to be done. Despite strengthened emissions reduction plans, notably from India, analysis by the highly respected climate coalition Climate Action Tracker shows that current pledges will result in average surface temperatures increasing to 2.4°C by 2100. And China and India’s success in editing the agreement text to reference coal “phase down” instead of the more definitive “phase out” was a blow to the small island nations and climate-impacted developing countries calling for rapid global decarbonisation.

In terms of next steps, the signs are that the business community’s engagement with climate will continue to gather pace. Two measures will help increase consistency and clarity for investors and other stakeholders to monitor their progress on decarbonisation. The Science-Based Targets Initiative’s Net Zero standard, launched just before COP26, provides much-needed clarity on aligning emissions reductions to climate science. And the IFRS Foundation’s International Sustainability Standards Board will increase the rigour around corporate ESG assessments, with its draft climate standard building on the bridgehead established by the Taskforce on Climate-related Financial Disclosure.

Gain insights and stay informed on ESG, sustainability, building back better or on any industry or topic that interests you here. To be added to the distribution list for our ESG+ Newsletter, please click here to input your details or email [email protected].