Your update on COP26

As negotiations continued at COP26, and with the end of the conference in sight, participants debated whether the pledges made would actually achieve the goal of limiting global warming to 1.5°C – with new reports suggesting they would not. Meanwhile announcements continued to roll out on topics including the decarbonisation of transportation, and the built environment. Here’s our round-up.

A first draft of the Glasgow Agreement was published on Wednesday, calling on countries to commit to more ambitious emissions reduction targets by the end of next year. Remaining focused on curbing warming to 1.5°C, the document places a strong emphasis on accelerating the phase-out of both coal and fossil fuels – a UN first as no previous climate deal has specifically referenced coal. No firm dates or targets were mentioned in relation to these phase-outs. Analysis from BBC Environment Correspondent Helen Briggs suggests that “one hell of a fight” is ahead if world leaders are to reach consensus by the close of the conference, with strong pushback expected from countries with large coal, oil and gas interests, such as Australia and Saudi Arabia. COP26 President Alok Sharma has stated that he will not seek an extension to the conference beyond Friday’s scheduled closure, admitting that leaders have “a mountain to climb” to finalise negotiations.

What do 1.5°C pledges add up to? More like 2.4°C says Climate Action Tracker, UNEP

As negotiations continue, two respected bodies provided what can only be described as sobering assessments of the updated national pledges to cut emissions, and whether these will “keep 1.5°C alive”. The climate analysis coalition Climate Action Tracker estimates that a lack of short-term emissions reduction between now and 2030 and an absence of longer-term targets would result in an average temperature rise of 2.4°C by 2100, assuming all current pledges are met. However, noting that, in many cases, the policies to achieve this are not yet in place, it suggests that a temperature rise of 2.7°C is possible. The UN Environment Programme likewise concludes that, based on current net zero pledges, and nationally determined contributions (NDCs), there is a 90% likelihood of average temperatures rising by 2.4°C to 2.5°C over the course of the 21st century. In the Guardian Bill Hare, of Climate Analytics – one of the groups behind Climate Action Tracker – notes: “We are concerned that some countries are trying to portray [COP26] as if the 1.5C limit is nearly in the bag. But it’s not, it’s very far from it, and they are downplaying the need to get short-term targets for 2030 in line with 1.5C.”

COP26 continues to highlight the many challenges associated with agreeing to a modernised climate framework. One such issue is trying to establish the rules to govern global carbon markets which is exposing tensions between nations. In an ideal world, negotiators hope to create a market that will “unleash trillions of dollars to protect forests, build renewable energy plants, and fund new projects to halt climate change” as Reuters reports. But to do that, it will be necessary to agree on more nuanced fundamentals, including how to divert market proceeds to climate adaptation, use old units from the Kyoto Protocol, and count credits traded between countries. An example of the fault lines can be seen with Kyoto credits: Brazil, China and some Middle East nations want these carried over to the new market, while the EU wants to analyse how many credits this would include, and what time period they would cover. Another issue at hand is that of ‘double counting,’ whereby both the buyer and seller of an emission reduction credit would count the transaction towards their climate target. While the EU has reiterated its strong opposition, Brazil has indicated its support. These challenges further beg the question: do purchasing credits pose a long-term solution to the problem, or are they simply a form of ‘climate delay’? As of now the discussions continue…

Wednesday was transport day at COP26 and the UK government seized the moment to confirm a pledge for zero-emission HGVs by 2040, while also unveiling a new charge point concept. The government’s press release notes that the UK will become the first country in the world to commit to phasing out new, non-zero emission heavy goods vehicles, with all new HGVs sold in the UK to be zero-emission by 2040. The HGV announcement and charging point concept, slated by The Rt Hon Grant Shapps to “become as iconic as the Great British post box”, follows this week’s scoop in the Financial Times that a global deal to eradicate new car emissions by 2040 is stalling due to key stakeholders refusing to sign. The deal has reportedly not received endorsement from four of the world’s five largest vehicle makers, nor has it been signed off by the US, China, and Germany. According to the FT, the carmakers’ reluctance stems from the absence of key governments, while US President Joe Biden is concerned by a domestic backlash and Germany’s stance involves the potential pursuit of low, but not zero, carbon synthetic fuels. In terms of China’s approach, the FT indicates that “discussions have involved whether Beijing would accept a less onerous target for half of its vehicles to be zero emissions”.  A VW spokesperson said: “While the overall global goal of reaching zero emissions . . . is non-negotiable, regions developing at different speed combined with different local prerequisites need different pathways towards zero emissions.”

In response to UN findings that women are more likely to suffer the consequences of climate change than men, the UK has announced two new programmes at COP26 backed by funding of £165m. To increase the visibility of women within the climate action movement and support those most vulnerable, the initiatives will invest in local women’s groups across Asia-Pacific. The funding will also be used in Bangladesh to empower women’s leadership, education and skills. Amanda Blanc, CEO of British insurer Aviva commented to Reuters that while women make up 80% of those displaced by climate change, only 19% sit on the board of the World Bank and International Monetary Fund. Alongside the goal of enacting tangible change for women, the UK backed programmes aim to raise public awareness of the link between gender inequality and climate change.

In the run up to COP26, the World Green Building Council (WorldGBC) updated their Net Zero Carbon Buildings Commitment – which enables companies to show leadership in the decarbonisation of the built environment – to include maximum reductions in embodied carbon, as well as operational carbon. The move represents a significant step change, taking into account emissions in relation to the whole lifecycle of a building, including materials used, the supply chain and construction. With the 44 new signatories announced this week, the Commitment now has a total of 156 signatories, accounting for approximately 6.5 million (tCO2e) of portfolio emissions annually and more than $300 billion annual turnover. To keep the global temperature rise of no more than 1.5°C within reach, the #BuildingToCOP26 Coalition, a consortium of 10 leading organisations catalysing climate action in cities, regions and the built environment, has called for emissions from buildings globally to be halved by 2030, and to reach net zero whole lifecycle emissions for all buildings by no later than 2050.

The UK Green Buildings Council (UKGBC) has also launched a Net Zero Whole Life Carbon Roadmap which aims to decarbonise the built environment and meet the net zero target of 2050.  It sets out the actions required from Government, local authorities and other stakeholders for achieving net zero across the construction, operation and demolition of all buildings and infrastructure throughout the UK. Many of the recommendations have been aligned with industry initiatives such as Construct Zero from the Construction Leadership Council, the UK’s Sixth Carbon Budget, and the Construction Industry Council’s Climate Action Plan.  In some areas the recommendations build on existing Government policy initiatives, providing further proposals and timelines. Standout recommendations include a National Retrofit Strategy by 2022 for the residential sector, addressing one of the built environment’s key emitters, with a mandate for creating a clear national homes upgrade programme by 2040. The roadmap suggests following up with a mandatory minimum EPC rating of C, for owner-occupied homes at the point of sale by 2028.  Whole life carbon is also addressed by the roadmap, recommending mandatory measurement and reporting of embodied carbon for all new large buildings and major refurbishments by 2023, with various standards (limits) set for 2025, 2027 and 2030. Julie Hirigoyen, chief executive of the UKGBC, said the roadmap went beyond the government’s recent Heat and Buildings Strategy which disappointed many.

Lucy Jordan, Consultant in our Energy practice and UK youth campaigner for climate change, provides her take on the COP26 event.

As the majority of the world leaders departed from the conference, so did a considerable chunk of the social media commentators. The key conversation drivers on Twitter this week were: 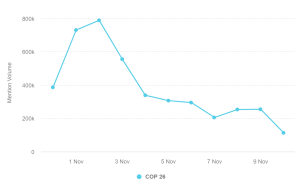 Volume over time chart: Overall volumes of online discussion has dropped significantly since the end of the World Leaders Summit, as COP26 began to focus on more detailed negotiations.

Emotion expressed in language used in online discussion: The last few days saw an increase in proportion of ‘joy’ in social conversations, largely as a result of discussions by young people of their efforts to change the world.

Gain insights and stay informed on ESG, sustainability, building back better or on any industry or topic that interests you here. To be added to the distribution list for our ESG+ Newsletter, please click here to input your details or email [email protected].

NOTABLE DEVELOPMENTS What We Are Watching:  CONGRESS CONSIDERS ANOTHER ROUND OF COVID RELIEF FUNDING: Democratic leader...

Investor Relations News With Unilever facing criticism from long term investors, we begin this week with a reminder of t...