Your weekly updates on ESG and more

In this week’s edition, we look at whether companies are truly reflecting climate risks in their reporting; whether the market is yet to fully understand why greater gender diversity leads to better business outcomes; and how big pharma has a chance to solidify the huge bounce in its public reputation. We also look to explain why fossil fuel outperformance remains compatible with ESG rating outperformance, while the impact of Sustainable Finance Disclosure Regulation (“SFDR”) continues across the globe.

With reporting against the Taskforce on Climate-Related Disclosure (“TCFD”) now mandatory for UK companies, our latest piece of thought leadership identified a variance in the level of disclosure provided up to 2020. Even though the framework was not mandatory during that period, the research may point toward the amount of work UK companies need to do during 2021 to meet their regulatory obligations; enhance the information they provide to the market; and, ultimately, improve their oversight of climate-related risks as the issue becomes the single biggest one for a host of stakeholders. Covered in the Financial Times, the report found that 154 companies referenced the TCFD in 2020 – up from 73 in 2019 and 39 in 2018 – but only 49 provided extensive disclosure against all four recommendations of the framework, including setting targets.

With a host of major investors indicating that 2021 will be the year they use their franchise to pressurise companies to act in this space, the coming two months may see climate added to the risk areas for companies ahead of their AGMs. Certainly, we would expect the annual reports currently being released to devote far greater prominence to the TCFD, above and beyond simple references. The report also pointed to a slow but marked increase in discussion of Sustainable Accounting Standards Board metrics in the UK.

Gender diversity improves performance, but how?

The debate over the merits of gender diversity has been settled for a long period, with a host of evidence pointing to [more diverse] firms being more profitable, more socially responsible and providing better customer experiences. However, as detailed in the Harvard Business Review, the reasons why this is the case have been covered to a lesser degree. The article explores in greater detail what specific changes drove superior performance after female appointments were made. The research from leading academics “examined exactly how firms changed their strategic approach to innovation” after such appointments, with their findings pointing to three primary criteria:

The authors state that they are making “no claim as to whether these shifts are intrinsically better”; however, in a world where institutions and wider stakeholders are consistently lamenting the prevalence of short-termism, the shifts outlined may well provide a level of comfort and further embed the push for greater balance at the top of major corporations.

SFDR: Early days but already €2.5trn of assets under Articles 8 & 9

With Level 1 of the Sustainable Finance Disclosures Regulation (SFDR) in operation, an overall picture of the types of funds in operation has started to emerge. Asset managers are now obliged to publish both pre-contractual statements and disclosure statements on their websites about which of their products fall into three distinct categories. ESG Clarity writes that, while asset managers are being cautious in their approach to classifying their funds as Article 8 or 9 (the categories relevant to ESG and sustainable finance) already some €2.5trn in European fund assets is estimated to sit under these categories, with this amount expected to grow over the coming months. ESG Clarity also draws attention to research carried out by Morningstar which sheds light on the groups which have the most funds under Articles 8 and 9. The report notes that French managers Amundi (529) and BNP Paribas (310) offer some of the largest ranges of investment products in these categories. Concerns have been raised before about companies simply “becoming ESG”; however, as disclosure obligations and regulatory sophistication rise, such a practice should become more challenging. Indeed, the Wall Street Journal has also continued to cover the SFDR closely, setting out the EU determination to define what makes an investment ‘green’. WSJ noted that analysts predict that the SFDR will produce a ripple effect similar to the EU’s 2016 General Data Protection Regulation (GDPR), which is obvious to most.

Big Pharma’s response to the COVID-19 pandemic, and its ability to create safe and effective vaccines, has offered the industry a chance to build public trust in recent months: an opportunity it appears to have, at least for now, been successful in taking advantage of. A Harris Poll from the U.S. revealed that the public approval rating for the sector has increased from 32% in January 2020 to 62% in February 2021 – with the 30% growth being comfortably the largest increase compared to other industries included in the poll. Despite this, a recent, Bloomberg Opinion article argues that the “inequitable distribution and access of the vaccine globally” could erode the public’s trust and potentially undo all the positive reputational impact that vaccines have brought to the sector. The access to medicines index remains a cornerstone of ESG and sustainability credentials in the industry and if Big Pharma is to continue to enjoy a positive public reputation, while simultaneously enhancing its ESG credentials, promoting fair and equitable global access to vaccines may be a defining moment.

A recent study by S&P Global Market, which looked at 26 ESG exchange-traded funds and mutual funds with more than $250 million in assets under management between 5 March 2020 to 5 March 2021, showed that they performed better overall than the broader S&P 500 market. S&P reported that “outperformers rose between 27.3% and 55% over that period. In comparison, the S&P 500 increased 27.1%.” This suggests that, despite criticisms of ESG investing, ESG stocks during the pandemic seem to have been more resilient than the more traditional funds. At the same time, investors are increasingly investing more in ESG funds, with sustainable investment in the US reaching $51.1 billion in 2020. This was more than double the level of 2019. In addition, according to MorningStar Inc, “European sustainable funds now hold a hefty €668 billion of assets, up 58% from 2018.” These figures complement a previous review by S&P Global, in August 2020, which looked at 17 ESG funds and found that all but three had outperformed the S&P 500 in the year to date. Parnassus Endeavor Fund, in particular, did extremely well, going from the bottom of the pile at the start of 2020 to managing around $38 billion in assets by the end of the year.

The puzzle of fossil fuel stock outperformance in 2021

Despite all of the momentum seemingly going towards clean energy, fossil fuel equity prices have somehow been performing better in 2021. The FT pointed out examples, such as the ICLN i-Shares Global Clean Energy ETF being down 14% since the beginning of 2021 and TAN, Invesco’s solar ETF, declining 10.7% from the start of trading in January. On the other side, XLE, an ETF representing major oil companies, has risen 29.4% in the year to date. Although this may be puzzling, it may relate to the clean energy space becoming overcrowded and harder to compete in. The prices of clean energy projects are becoming less favourable as developers bid against each other. Meanwhile, Oil E&P companies have already survived past price declines and are producing oil below capacity, saving money. Fossil fuel companies also have to deal with fewer expectations now being built into the price. However, this turn of events doesn’t seem too likely to last. Public and private sector momentum remains towards clean energy, as there is an acknowledged global shift to net zero carbon emissions by 2050. There may be some losers in this space due to the increased competition and fight for market space, but as an overall industry all of the momentum there remains.

Investors in ESG funds are taking part in a growing trend to pivot from growth to value stocks, defined as companies that are seen as undervalued relative to their earnings potential. Data from Nuveen’s ESG Large-Cap Value ETF show that the fund is up more than 10% for the year, while the firm’s ESG Large-Cap Growth ETF is up only half that. The Wall Street Journal reports that the trend is reflective of ESG fund flows as well, as data from Morningstar Direct show that inflows into ESG funds as of February totalled nearly $30 billion, while value-oriented funds totalled $7.5 billion. As the market transitions away from growth stocks, namely high-profile stocks in tech, the trend towards value investing may continue, further accelerated by an increased number of value-oriented investment products widely expected to come to market this year.

Has COVID-19 really put an end to the shareholder primacy model of capitalism?

That’s the view of a former member of the steering group who contributed to the 2006 Companies Act. John Plender argues this week that the pandemic has demonstrated that the shareholder primacy model of capitalism that emerged in the 19th century is wholly inappropriate for 21st-century conditions. He details that, at the outset of the Covid-19 pandemic, many assumed that the surge of interest in stakeholder capitalism would go into reverse. Yet the much-discussed call by BlackRock’s Larry Fink for companies to link corporate purpose to their stakeholders looks with hindsight to have been politically acute. While many question whether this commitment is more than rhetorical, for Plender there can be no doubt that big business and institutional investors are under increasing pressure on this issue, with US president Joe Biden having vowed last July to “put an end to the era of shareholder capitalism”. While we aren’t likely to see the end of the Friedman doctrine any time soon, change is underway due to current concerns not just about Covid-19 but climate change, wage stagnation, inequality and diversity.

In Case You Missed It

Charts of the Week 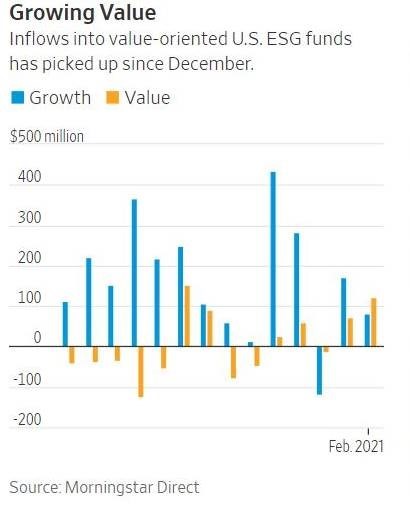 Gain insights and stay informed on ESG, sustainability, building back better or on any industry or topic that interests you here. To be added to the distribution list for our ESG+ Newsletter, please email [email protected]

NOTABLE DEVELOPMENTS What We Are Watching:  CONGRESS CONSIDERS ANOTHER ROUND OF COVID RELIEF FUNDING: Democratic leader...

Investor Relations News With Unilever facing criticism from long term investors, we begin this week with a reminder of t...