Your weekly updates on ESG and more

This week’s edition starts in the US, where the SEC is considering new ESG guidance, while also asking if the winds of (climate) change could blow in Omaha. We then move across to the EU where we look at the early actions being taken under recent disclosure requirements and discuss how material ESG considerations can influence UK executive pay.

This week, the Acting Chair of the US Securities and Exchange Commission (SEC), Allison Herren Lee, issued a statement which confirmed that, as part of its review into climate and ESG reporting by companies, it is seeking input on which climate metrics and data should be used for disclosure. Specifically, the statement included a “Questions for Consideration” section which provides the basis for informing how the public should construct its input, including how the SEC can, “regulate, monitor, review, and guide climate change disclosures in order to provide more consistent, comparable, and reliable information for investors” and how the SEC might build on its existing voluntary ESG reporting frameworks. The announcement follows a number of other ESG-focused measures by the SEC, including a review into how companies are reporting climate related risks and disclosures, and the creation of a Climate and ESG Task Force charged with proactively identifying company misconduct relating to ESG issues. These initiatives and developments reflect both the growing investor demand for enhanced ESG disclosures and the increased focus on climate-related disclosures since Biden took office.

…but the Oracle of Omaha is not on board

As one of the world’s most successful investors of all time with a career spanning over 50 years, Warren Buffett commands respect and when he speaks, the market listens. This week, Berkshire Hathaway urged shareholders to vote down two proposals at its upcoming AGM that would force the nearly $600bn industrials-to-insurance conglomerate to disclose its efforts to tackle climate change and diversity and inclusion in the workforce. The company told investors that it did not consider a formal annual assessment of how it manages climate-related risks as “necessary”, noting that its board already received regular reports on the matter, according to proxy materials mailed to shareholders. The company has succeeded in batting away shareholder proposals in the past, but the direction of travel here may eventually necessitate a change, given the SEC’s interventions on the topic described above, and interim chair Allison Herren Lee’s view that questions of climate and ESG are now “key to investors” and “front and center” for the regulator.

In the latest sign that combatting greenwashing is becoming a key regulatory priority, Denmark’s Financial Supervisory Authority (FSA) has set up a unit to monitor investors’ sustainability disclosures under the Sustainable Finance Disclosure Regulation (SFDR) which came into effect last week.

Responsible Investor (RI) reports that the new unit will have powers to issue injunctions, warning notices and police reports – in selected cases – to companies that do not comply with the SFDR. In line with how the more granular aspects of the SFDR will come into effect in 2022, the Danish regulator is reported to have said that it will exercise leniency in the initial period. RI also points out that the investor community is increasingly critical of investment products which are perceived as falling short of their stated sustainability credentials. As the impact that asset managers’ investments – particularly in relation to climate change – continues to come into focus, other EU member states will likely adopt similar measures to combat greenwashing.

Nestlé to give shareholders say on ESG matters

On Tuesday, Nestlé published its 2020 Annual Report, along with an invite to its Annual General Meeting and a short letter to its shareholders. The letter outlined the proposed agenda items, including a resolution asking shareholders to support Nestlé’s recently published climate roadmap, stating that it believes that “shareholders should have a say on Environmental, Social and Governance (ESG) matters.” This followed its announcement in February, which committed to giving shareholders voting power and a say on topics such as Nestlé’s “reduction of greenhouse gas emissions, responsible sourcing, sustainable packaging and water, among others.” To ensure that these ESG objectives are delivered, Nestlé is also changing the structure of its Executive remuneration to ensure that remuneration is now better aligned with the increased focus on ESG across its business. Nestlé is proposing that 15% of Executive Board members’ short-term bonus should now be linked to the “achievement of ESG-related objectives”, with the Nestlé Board of Directors setting those objectives at the beginning of each year. Since its introduction in 2002, “say on pay” has become the most dominant issue at AGM; however, the continued growth of ESG interest amongst investors will likely result in the reporting of non-financial performance becoming an increasingly important issue at AGMs moving forward.

Research from the London Business School and PwC this week shows almost half of FTSE 100 companies have now linked executive pay to environment, social or governance (ESG) targets. Investors are stepping up demand for companies to adopt non-financial goals in the upcoming annual general meeting season. However, nearly half of ESG measures used in judging CEO pay are not deemed “material” to shareholder value according to the report, which uses materiality measures set out by the Sustainability Accounting Standards Board, the independent standards-setting organisation. Commenting on the finding Tom Gosling, executive fellow at London Business School’s Centre for Corporate Governance, argues that linking ESG targets and pay can lead to “practical difficulties, and scope for unintended consequences”, such as distorted incentives and measurement challenges. “There’s a risk that more ESG targets simply result in more pay, due to the difficulty of knowing how stretching these targets are”. However, on the basis that what gets measured gets managed, thoughtful alignment of executive pay with ESG metrics does have the potential to strengthen organisational alignment and deliver tangible outcomes.

Late last week the Parker Review published its latest findings on ethnic diversity in Britain’s boardrooms. The review, chaired by Sir John Parker, said significant progress had been made in the past year towards the “one by 2021” target, with about 80% of FTSE 100 boards this month reporting at least one director from a minority ethnic group. This is a welcome increase when compared to 52 companies in January last year. However, 19 companies still lack any board-level ethnic minority representation, with just five non-white FTSE 100 chief executives, one fewer than last year. There are also only two non-white chairs and four in a chief financial officer role. Parker said: “This survey of FTSE 100 companies represents significant progress towards the target. We would hope the remaining companies in the FTSE 100 will ensure they follow this encouraging lead and align with the business case that underpins the review.”

Emergence of social metrics in ESG

The ‘S’ in ESG has sometimes been described as a “problem child”,  characterised by inadequate data and a lack of meaningful metrics, ultimately meaning that investors cannot get a full picture of risks, opportunities and impact. For years, companies have struggled to report on their social impact in a financially meaningful way. GreenBiz suggests that this year, social reporting could experience a “wave of maturity and transparency”,  similar to the one that hit environmental disclosure in 2020.

2020 proved something of a catalyst for a change in the ESG sphere, directly as a consequence of the world’s collective experience of COVID-19. GreenBiz reports that a surge of social data has prompted corporate leaders and investors to get more serious about social metrics. The pandemic also brought the interrelationships between the three components of ESG to the fore, as companies recognised the “critical nature of governing with a social conscience.” Standardisation to the degree that environmental and governance issues are at is still a way off, but increased investor pressure may soon lead to an expansion of measurable and meaningful social disclosure.

The UK business secretary, Kwasi Kwarteng, has today released a white paper detailing an audit and corporate governance reform, which, as Sky News initially reported, “could make it mandatory for all listed companies to incorporate “malus and clawback” arrangements in directors’ pay arrangements.” If the suggested changes are implemented, it would impose tougher rules on executive remuneration, where bonuses that have already been awarded could be taken back and future bonuses could be cancelled where there is a basis to argue that directors had failed to act in the best interests of customers or employees. The white paper also focuses on the big four accounting firms, Deloitte, EY, KPMG and PwC, following public and political anger over prominent audit failures at companies such as BHS, Carillion and the owner of Patisserie Valerie. In the press release announcing the white paper, the concept of audit is defined as: “able to extend beyond a company’s financial results to look at their wider performance, including against key climate targets, to ensure investors and other interested parties are fully informed and can hold companies to account as the UK seeks to eliminate its contribution to climate change by 2050”.

Chart of the Week 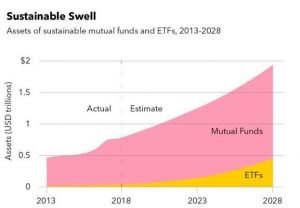 In Case You Missed It

Gain insights and stay informed on ESG, sustainability, building back better or on any industry or topic that interests you here. To be added to the distribution list for our ESG+ Newsletter, please email [email protected]