In the United States, the Centers for Disease Control and Prevention updated its guidance for fully vaccinated Americans on Friday (2nd April), stating that traveling both domestically and internationally was “low risk” for fully vaccinated travellers while recommending that all domestic quarantine restrictions for such travellers be lifted. In the United Kingdom, the government has announced that a new “traffic light” system will be introduced to assess the level of risk and associated quarantine requirements associated with individual countries that could come into place as soon as May 17th.

With the success of vaccination programmes becoming apparent, FTI Consulting has conducted opinion research among 250 global institutional investors – the entities driving the global purchasing of securities, property and other investment assets, including  banks, insurance companies, pension funds, hedge funds, investment advisors, endowments, and mutual funds – to assess their perspectives on how individual countries have responded to the coronavirus crisis, the likelihood of vaccine passports and expectations surrounding returning to the office.

A summary of the methodology and sample base is outlined at the end of this note.

70% of global institutional investors (GII) believe that the introduction of vaccine passports for international travel is either “definitely likely” or “highly likely”.

With 83% believing they are “definitely likely” or “highly likely”, North American respondents overwhelmingly expect their introduction in contrast to a smaller number in Asia-Pacific (75%) and Europe (50%). 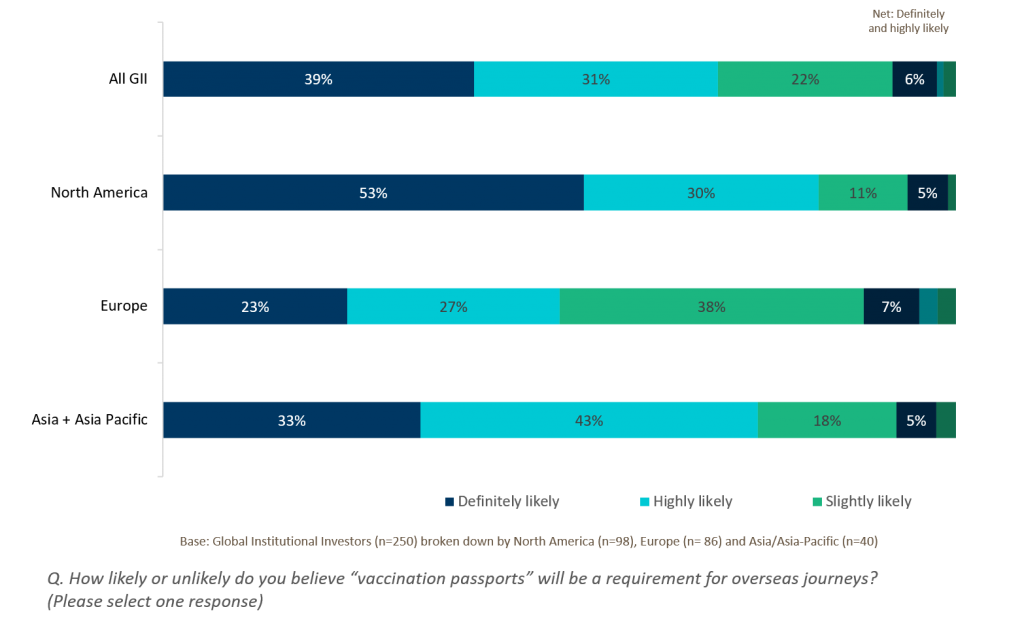 A common global approach to vaccine passports considered most likely

The most likely format GIIs expect vaccine passports to take is via “a common global approach” with 45% expecting this approach (in particular, 66% by North America), followed by a “country-by-country approach” in second place with 36%. Europe (47%) and Asia (40%), in particular, most expect the latter approach. 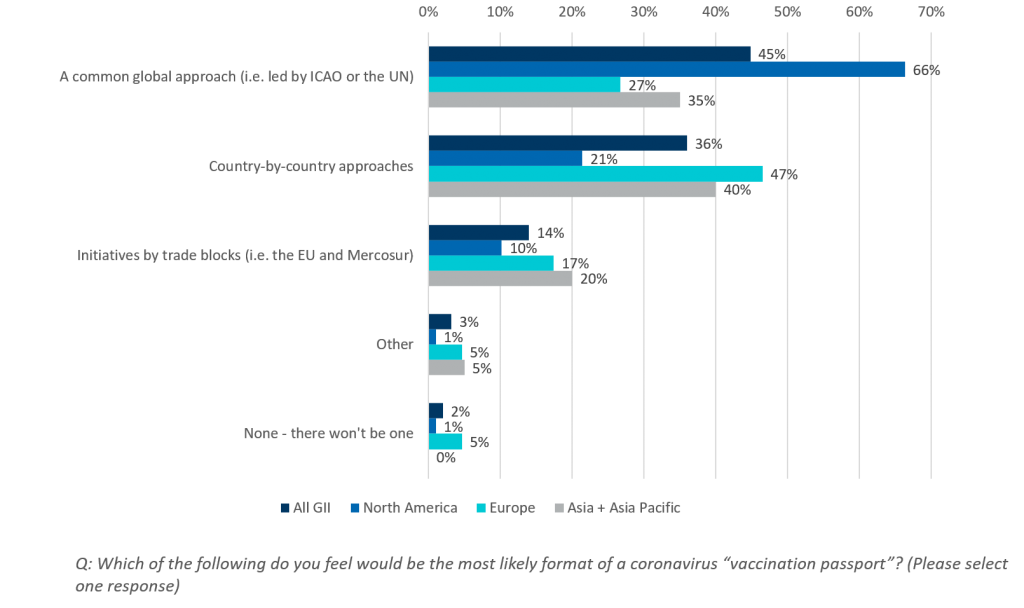 Interestingly, despite the European Union having announced that it is considering the adoption of its own form of travel certification, only 17% of respondents from Europe expected such efforts to be implemented by “initiatives by trade blocks”. North America respondents differ from both Europe and Asia in the “global” versus “country” approach.

US leads perceptions of country-by-country resilience towards Coronavirus

There is a wide range of perspectives regarding the question of which country has demonstrated the greatest resilience towards coronavirus, with responses influenced by the respondent’s own country.  Although 32% of the survey’s overall sample believe the US has been the most successful in fighting coronavirus, 61% in North America parochially believe this, while just 1% in Europe agree with them. 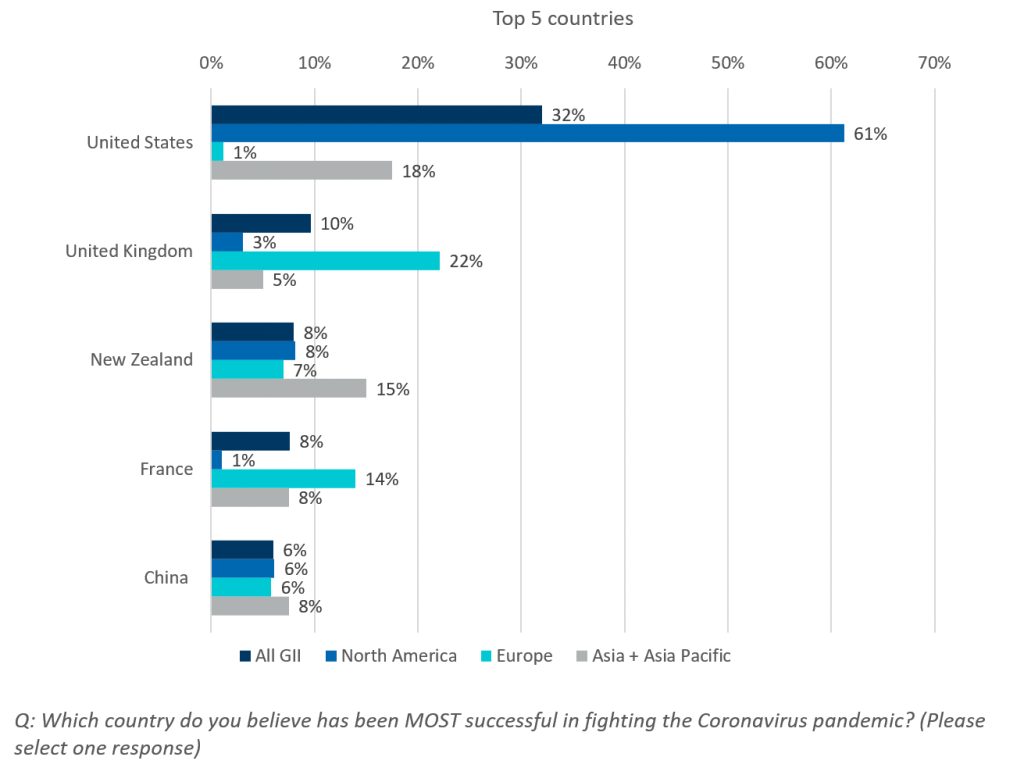 This pattern of parochialism is largely followed when asked about the most economically resilient with regards to COVID. Examining the overall example, aside from the United States, 10% of respondents believed the United Kingdom had shown greatest resilience, 8% apiece New Zealand and France, 6% China and 4% for Germany, Japan and Australia.

92% of global institutional investors continue to experience significant problems in resuming in-person meetings. Almost two thirds (65%) expect such problems to be gone in under 6 months’ time, with 95% believing there will be no more difficulties past 1 year.  The average time GIIs expect it to take for in-person meetings to recommence is close to six months (5.9). 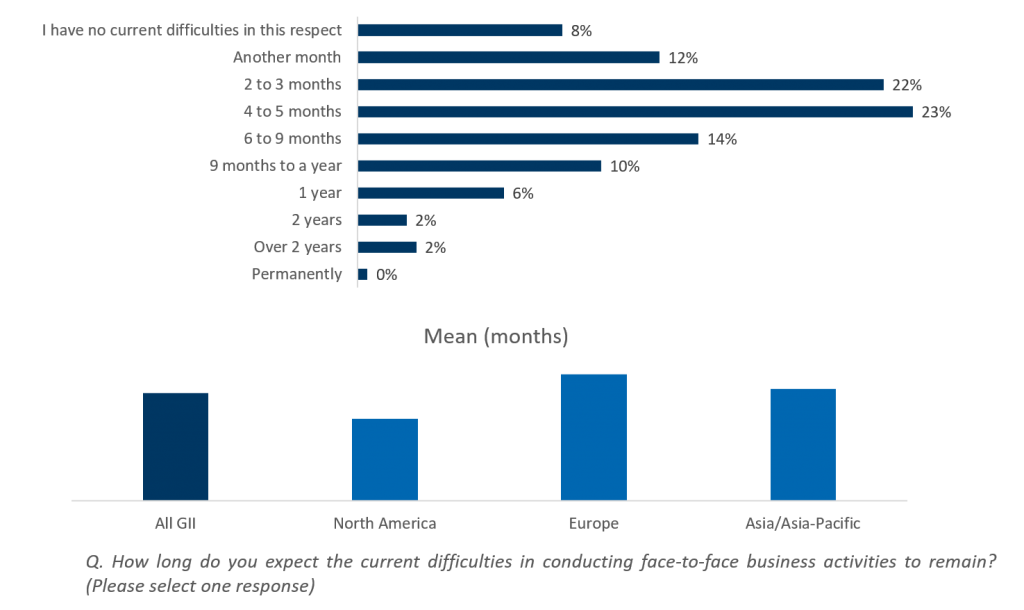 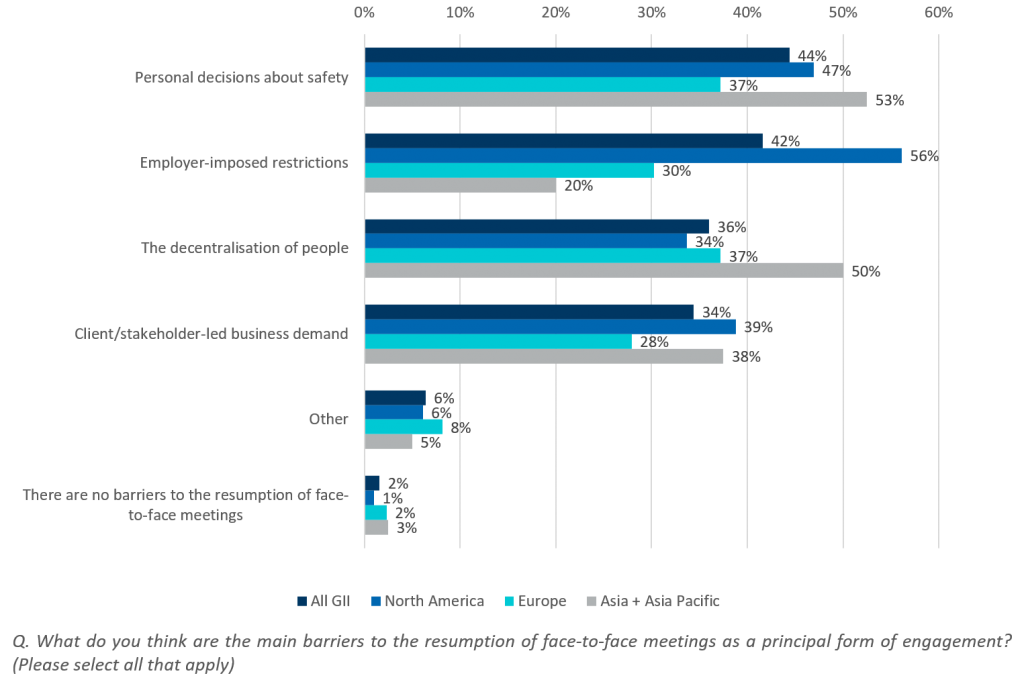 A 50:50 approach to working from home

On average, global institutional investors expect workers to be permitted to work from home almost half of time (48%) following the end of work-from-home requirements and the resumption of working in offices.

This is slightly higher in North America with 57% of working time expected to be spend working from home, while a slightly lower 41% for those GII employees based in Europe and Asia-Pacific. 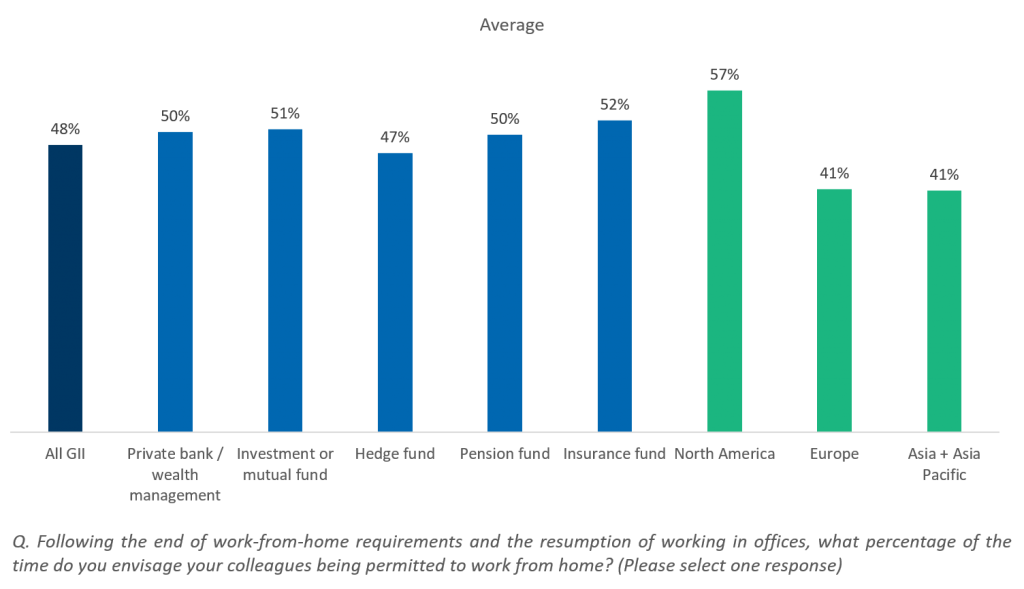 There was broad agreement in this “50:50” approach across all of the business sectors surveyed: insurance funds (52%), investment/mutual (51%), private bank/wealth management (50%), pension funds (50%) and hedge funds (47%), showing that the effect of the pandemic on work habits has impacted all sectors just as significantly.

The convention on rounding was followed, so sums may not always add up to 100%. For more information on the research methodology please contact Dan Healy: [email protected]